Posted on September 23, 2019 by Lutheran Church of the Resurrection 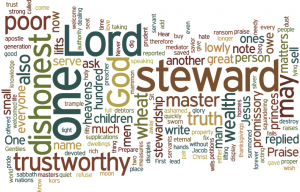 The text for our consideration today is the gospel reading from Luke 16 – “The Parable of the Dishonest Manager.” In this story, Jesus introduces us to a fictitious man who is caught red handed in ‘mismanagement’ of what was entrusted to him. The story has three scenes.

Scene one opens, “There was a rich man who had a manager, and charges were brought to him that this man was wasting his possessions.”

Whatever the charges happened to be, “[the rich man] called him and said to him, ‘What is this that I hear about you?”

And with that comes those dreaded words – “For you can no longer be manager.’” “You’re fired!” And with that, scene one ends.

Scene two opens with the ‘manager’ thinking about his situation. “And the manager said to himself, ‘What shall I do…” He looks inside himself and must feel pretty confident that an ‘audit’ of the books is not going to justify him. Rather than “saying to himself,” “once he examines the books he’ll see that those charges that were brought against me were false and give me my job right back,” – the manager begins to make plans for how he is going to survive unemployed.
His first move is look inside himself. And when he does, he concludes that there’s not much there. “I am not strong enough to dig, and I am ashamed to beg.”

So he turns from looking inside himself to looking outside himself. “I have decided what to do, so that when I am removed from management, people may receive me into their houses.”

He then “summons” those who are in debt to the rich man. They were buying on credit and paying their bills with ‘oil’ and ‘wheat.’ And the manager is determined to win their favor by slashing their bill, so that in their gratitude, they will “receive me into their homes.”

But the ‘manager’ has a problem. His problem is, he doesn’t have the ‘books.’ And so he has to ask each one what he owes.

“So, summoning his master’s debtors one by one, he said to the first, ‘how much do you owe my master?’ (Notice, he doesn’t say ‘ex-master’ who just let me go.) He said, ‘A hundred measures of oil. He said to him, ‘Take your bill, and sit down quickly and write fifty.’

“Then he said to another, ‘And how much do you owe?’ He said ‘A hundred measures of wheat.’ He said to him,’ Take your bill, and write eighty.’

Now the only way that that this story makes any real sense, is if the ‘debtors’ don’t yet know that this ‘manager’ has been fired. They think that he is acting as ‘manager’ on behalf of the ‘master’ just as he always has. And this is why he insists that they make the adjustment in their bill “quickly.” Once the word gets out that he’s been fired, they’ll realize that this is a scam.

Now let’s think about this. Once the “rich man” finds out what his ‘ex-manager’ has done, what is he supposed to do? He is in a very difficult position. He’s faced with two options.

He could contact all of those people who are so pleased and happy with him and say, ‘listen, I know that my manger cut the bill that you owe me, but he had no authority to do that since I had previously fired him. I’m sorry, but you’re going to have to add back onto your bill what he had written off.’ As you can imagine that is not go over very well at all.

Or, the master could go along with the scheme, and act as though he is in complete agreement with what the manager has done and maintain the tremendous ‘customer approval rating’ that he now has.

And as the “rich man” sees the position that the “manager” has created for him, he just sits there and SMILES. “The master commanded the dishonest manager for his shrewdness.”

Just to be clear, the “master” is not impressed with his “manager’s” wastefulness but with his shrewdness. That word, ‘shrewdness’ is also the word for ‘prudence.’ ‘Prudence’ is the first of the four ‘cardinal virtues,’ the other three being ‘temperance’ or ‘moderation,’ ‘justice’ and ‘courage.’

The first thing the “dishonest manager” did when the books were taken from him was to carefully think through his situation and weigh his options REALISTICALLY. He exercised ‘wisdom’ in clearly understanding that the answer to his dilemma must come, not from inside himself, but from outside himself.

And for this ‘shrewdness’ the ‘rich man’ “commended the dishonest manager.” And it’s right there where this story ends. But no sooner does the curtain close than the one who is telling this story steps in front of the curtain and explains the point of what we have just seen.

“Ladies and gentleman, you have seen how shrewd this “dishonest manager” was when it came to his master’s judgement of his poor stewardship of his ‘possessions.’ The manager’s plan depended entirely on the gamble that the “master” would be impressed with his ‘prudence’ and not furious with him. See how the “dishonest manager” was rewarded for his hope in his master’s mercy rather than in his own ability to save himself. HIS JUDGE BECAME HIS SAVIOR.

“Ladies and gentleman, I would like to see my disciples, my Christians be just as ‘shrewd’ in the way they deal with Me – for I am the “rich man” in this story. And the time will come when every life will be audited and every ‘waste’ of what I have entrusted to your stewardship will be made known to me.”

“I say to you, be MORE ‘shrewd’ than the man in this story. Do not look INSIDE yourself for how you will escape the judgement that will most certainly go against you. Rather, look OUTSIDE yourself – namely, look at Me, your ‘rich master.’”

“I say to you, be MORE ‘prudent’ than the “dishonest manager.” For if, in wisdom, he considered the risk of trusting in his ‘master’s mercy worth taking – how much more ought you risk putting your trust in Me to be merciful and forgive you all of your sins? For I, your judge, have become your Savior.”

“The highest hope of the “dishonest steward” in this story was that his fellow debtors might take him into their homes where he would find shelter and maybe a meal or two. But I say to you, be MORE ‘shrewd’ than this. In wisdom, set your sights on My Father’s house where I will prepare an “eternal dwelling” for you to live in with Me and My Father, where you will find perfect shelter and perfect security and eat at My heavenly banquet table.”

As this story opened, Luke told us that Jesus directed it to His disciples, His Christians. This is how they are to deal with every accusation leveled against them of their ‘mismanagement’ of their stewardship. Don’t deny it – that would be foolish. “If we say that we have no sin, we deceive ourselves and the truth is not in us.”

Rather, confess your guilt, trusting solely in the mercy of God. THAT is the ‘shrewdness’ that is called for from the ‘children of light.’

At the end of this discourse, Luke informs us that “the Pharisees… heard all these things, and they ridiculed Jesus.” In their eyes, no one had been guiltier of ‘mismanaging’ and ‘wasting’ what was entrusted to Him than Jesus had. He had squandered the forgiveness and blessings of God on tax collectors and sinners. And they were gathering the evidence to bring charges against Him.

But our Lord is not guilty of mismanagement of what has been entrusted to Him. For the Father has sent His Son into this world to slash the payment due for all of our debts, not by 20% or even 50% but by 100%. So that when the ‘books’ are opened and audited, there beside your name will be written, in the very the blood of Jesus Christ and Him crucified – ‘PAID IN FULL.’

And so, as disciples and followers of Jesus Christ, we strive to be ‘shrewd.’ In ‘wisdom,’ wanting neither to be ‘discovered’ nor ‘accused’ nor to ‘hit bottom’ when the books are opened and examined on the Last Day, we act today and every day, by daily confessing our sins before God, repenting of our ‘wastefulness,’ trusting that He is merciful and full of forgiveness.

And we daily receive His absolution, and daily swear to live this day as ‘children of light,’ anticipating the day when our “rich Master” will commend us, His dishonest stewards, for our ‘shrewdness,’ and welcome us into our eternal home.