Posted on September 29, 2019 by Lutheran Church of the Resurrection 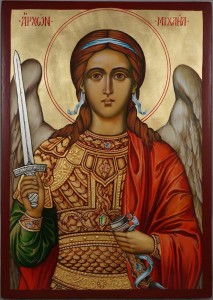 You are surrounded by thousands upon thousands who would have you believe that “what you see is what you get.” But by faith, you say, “…no eye has seen, nor ear heard, nor the heart of man imagined, what God has prepared for those who love him…” (1 Cor. 2:9) “I believe in God the Father almighty, maker of … all things visible and invisible.”

It is to the ‘invisible’ part of God’s creation – those “myriad of myriads and thousands of thousands of angels” that our attention is directed on this Festival of St. Michael and All Angels.

Today we are reminded of what we mean when we confess – that the one, true God is the maker of heaven and earth – which includes the visible and the invisible.

Which DOESN’T mean that if we had a stronger microscope or a more powerful telescope we COULD see it, but DOES mean that there is a realm of God’s creation which is altogether ‘other,’ and would be entirely ‘invisible’ and ‘unknown’ to us unless God revealed it to us and let it be ‘seen’ by us as He deems prudent.

“God the Father almighty, maker of heaven and earth,” is working out His plan for the “new heavens and the new earth” and the redemption of His “new Israel” in BOTH of these realms – “in all things, visible and the invisible.”

From his exile on the island of “Patmos” where, in this ‘visible’ realm, he has been sentenced to live, “on account of the word of God and the testimony of Jesus,” John is given a glimpse into the ‘invisible’ realm. And what an incredible ‘revelation’ it is. What John sees is nothing less than the entire history of God’s saving and redeeming work as it is seen from the ‘invisible realm.’ What John sees, ‘no eye has ever seen, nor ear has heard, nor the mind of man imagined,’ at least as long as we are in this ‘visible realm.’

This is what the eternal Son of God was referring to when He said, “I saw Satan fall like lightning from heaven.” (Luke 10:18). Which tells us that Jesus Christ sees both the ‘visible’ and the ‘invisible’ realms together, simultaneously, as one. To which all that we can do is fall to our knees and cry, “worthy are you, our Lord and God, to receive glory and honor and power, for you created all things, and by your will they existed and were created.” (Rev. 4:11)

And so today we are also reminded that there is far more to the ‘creation’ that what we can see or hear or touch or taste or smell.

So when you hear Peter tell you that “your adversary the devil, prowls like a roaring lion seeking someone to devour,” he’s telling you that what John saw take place in the ‘heavenly realm’ has spilled over into the ‘earthly realm’ and you need to be very alert and always in prayer. (1 Peter 5:8)

So often we simply don’t see the reason for the evil that happens or the one that it strikes. “He was so innocent.” “She was just a bystander.” “They didn’t do anything to deserve this.” “He was just doing his job.”

And how often have we been terribly confused and shamefully wrong about why things happened the way that they did? And when we blamed our neighbor or cursed our God – because we either forgot or never knew that there is an ‘invisible realm’ all mixed and mingled in this ‘visible realm,’ and the culprits behind the evil were actually those ‘outcasts’ from heaven that have been thrown down to the earth?
But today we are also reminded that it is not ONLY “that ancient serpent and HIS angels” that are all mixed and mingled in this ‘visible’ realm in which we live, but God has also deployed His holy angels to defend and protect us against in ways that we cannot.

Our Lord speaks His word of great comfort to all who live in the ‘visible realm’ saying, “See that you do not despise one of these little ones. For I tell you that in heaven their angels always see the face of my Father who is in heaven.” (Matthew 18:11)

“I believe in God the Father almighty, creator of all things… visible and invisible.” He has created His holy angels of the ‘invisible’ realm to watch over His “little ones” who live in His ‘visible’ realm.

The Psalmist finds his comfort and peace in the assurance that though he is surrounded by evil that he can see and that he cannot see, God has created His holy angels to protect him in ways that he cannot protect himself. “For he will command his angels concerning you, to guard you in all your ways. On their hands they will bear you up lest you strike your foot against a stone.” (Ps. 91:11-12).

As Moses and Israel set out on the journey through the wilderness to the Promised Land, God assured them that “Behold, I send an angel before you to guard you on the way and to bring you to the place that I have prepared.” (Ex. 23:20)

In his great weariness and depression, an angel is sent to the prophet Elijah saying, “Arise and eat, for the journey is too great for you.” And the angel showed Elijah a cake of hot bread and a jug of water that Elijah had not seen. “And he arose and ate and drank, and went in the strength of that food forty days and forty nights.” (1 Kings 19:7-8)

In his utter confusion and uncertainty, an angel told Joseph, what he otherwise would have never known or understood. “Joseph, son of David, do not be afraid to take Mary as your wife, for that which is conceived in her is from the Holy Spirit.”

And when Herod sent his soldiers to kill Mary’s baby, it is an angel who tells Joseph to “Rise, take the child and his mother, and flee to Egypt, and remain there until I tell you.” (Mat. 1:20; 2:13).

• It is angels who explain the meaning of the empty tomb to the women.
• It’s an angel who opened the prison door and told Peter to go and preach the gospel.
• An angel who told Philip to go to the Ethiopian who need someone to interpret the scriptures to him.
• An angel that tells Paul where to plant new churches.
• An angel that was sent to John to show him the things that must soon take place.
And we could go on and on.

We who live in the ‘visible’ realm of God’s creation cannot see the ‘invisible’ realm that surrounds us. But the God whom we believe and confess created the heavens and the earth, “saw all that He had made” – the ‘visible’ and the ‘invisible.’ He created angels to be His “ministering spirits sent out to serve for the sake of those who are to inherit salvation.” (Heb.1:14)

Today we are reminded that we ought to take GREAT COMFORT in knowing that we are not left on our own to defend ourselves against what we cannot even see – but that our God has created myriad upon myriads and thousands upon thousands of angels to defend and protect us against the “ancient serpent and his angels.”

Today however, we are also reminded that the final victory over the devil and his minions has already been accomplished – and not by St. Michael or the holy, angelic army – but by our Lord and Savior, Jesus Christ. And that victory was accomplished, not in the ‘invisible realm’ but in the ‘visible realm’ – where you and I live and move and have our being IN THIS WORLD.

It was not with ‘invisible’ or ‘spiritual’ things that the One through Whom all things were created, ‘crushed the head’ of the ‘ancient serpent.’ But our Lord and Savior won the victory by ‘coming down from heaven,’ being born into this ‘visible’ realm, and gaining the victory by His very physical and earthly body and His blood.

And now, the offspring of the woman, gives His body and His blood, NOT TO HIS HOLY ANGELS, but to His “little children,” that we may NOT FEAR the “great dragon” but STAND FIRM in the Name and the body and blood of Jesus that we have been given.

For this is just what we all heard the “loud voice in heaven” proclaim. “And they have conquered [Satan] by the blood of the Lamb and by the word of their testimony, for they loved not their lives even unto death.”

You want to be sure you hear that? Not only does John see that the ‘devil and all his angels’ have been cast out of heaven and thrown down to the earth, but he also sees that all the “little children” of God, from every time and place, who lived by faith in the name and the body and the blood of Jesus Christ – ALSO conquer the devil and his angels, even while we live today, in this ‘visible’ realm, all mixed and mingled with the ‘invisible.’ “For THEY have conquered by the blood of the Lamb and by the word of their testimony, for they loved not their lives even unto death.”

Today we are reminded that ‘it is truly good, right, and salutary,’ that we who have received the “blood of the Lamb” in our body, and the “word of their testimony” in our ears, should join with the angels and the archangels and all the company of heaven, in the ‘feast of victory’ for our God, and for all His ‘little children.’