Posted on October 7, 2019 by Lutheran Church of the Resurrection 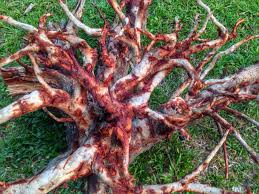 The text for this sermon is the gospel reading that we just heard. Jesus is speaking to His ‘disciples.’ They are His ‘followers’ who listen to Him in order to learn from Him. Whether they recognize that He is the Christ, the Son of God yet is doubtful. But they are deeply interested in what He is saying. He speaks about God and how God wants man to live in relation to Him and to their neighbor in a radically different way than anything they have heard. And they want to ‘follow’ Him. They want to fit the way that they think and live their lives into the pattern that He has been teaching them is the right way to think and live.

And He said to His disciples, “Temptations to sin are sure to come.”

Those of us who would be one of His disciples want to know what this means and how we are to live our lives before God knowing that, “temptations to sin are sure to come.”

The Scriptures speak about two kinds of temptation. There is actually a ‘TEMPTATION TO GOOD.’ Temptations to good are tests that come from God for the purpose of strengthening our faith and trust in Him, and our walk and life with Him.

The Bible says that God ‘tested’ Abraham. It’s the same word for ‘tempt.’ God told Abraham to sacrifice his son, Isaac. And that ‘temptation to good’ had a dramatic effect on Abraham’s faith and life.

Jesus was ‘tempting’ the disciples when told them to get in the boat and set sail, knowing that a sudden storm would threaten to drown them. By this ‘temptation to good,’ they would learn to trust Him more.

He ‘tempted’ the disciples when He told them to feed the crowd of 5,000 hungry parishioners with five loaves and two fish. And by this ‘temptation’ to doubt, they would grow in their faith.

God tempts to good – for the purpose of ‘strengthening our faith,’ which is just what we hear the Disciples ask Jesus to do for them. “The apostles said to the Lord, ‘Increase our faith.’” I wonder if they knew what they were asking for. “Take your son, your only son, whom you love…” “Set sail…” “Feed this crowd.”
The other ‘temptation’ that the Scriptures speak about is the ‘TEMPTATION TO SIN.’ The ‘temptation to sin’ NEVER comes from God. In the beginning, the ‘temptation to sin’ came to Adam and Eve from the devil in the Garden of Eden. “Did God really say…?” “You shall not surely die.”

Every TEMPTATION TO SIN is for the purpose of creating doubts in us about the truth of God’s Word and the wisdom in actually putting your trust and confidence in His Word and Promise to you. TEMPTATIONS TO SIN create little cracks and fissures in your faith until finally, a ridiculous straw breaks the camel’s back.

Today, the devil’s work has become so much easier than it was in the beginning. Contrary to popular opinion, we are not born ‘a blank slate.’ Adam’s ‘original sin’ been deeply etched onto us and we come into this world with an inborn doubt and distrust of God. Which not only makes us helplessly vulnerable to the devil’s ‘temptation to sin,’ but it also make us willing co-conspirators with him WHO SEEM TO ENJOY TEMPTING ONE ANOTHER TO SIN.

And doesn’t that just give a whole new sound to the words that follow. “Temptations to sin are sure to come. But woe to the one through whom they come! It would be better for him if a millstone was hung around his neck and he was cast into the sea than that he should cause one of these little ones to sin.”

Each and every one of us has, not just the potential but the strong inclination to be that person through whom temptations to sin come. Jesus’ “woe to the one through whom they come” ought to set our heart to pounding when we consider how many times we have been the tempter to sin, no matter how innocent or trivial the temptations might seem.

Whatever the punishment for tempting others to sin is, it must be unspeakably terrible if being cast into the sea with a millstone around the neck is better.

And so Jesus says, “Pay attention to yourselves.” “If your brother sins, rebuke him and if he repents, forgive him.”

And as if that were enough, Jesus ups the ante. “If [your brother] sins against you seven times in the day and turns to you and seven times saying, ‘I repent,’ you must forgive him.”

“And the apostles said to the Lord, ‘Increase our faith.’”

That’s an interesting response. We might have expected them to say, “Increase our forgiveness.” “Help us to be more forgiving.” But they say, “Increase our faith.” Whether they realized it or not, they were asking the Lord to ‘tempt them to good,’ – because that’s how faith grows and increases and gets stronger.

“And the Lord said, ‘If you had faith like a grain of mustard seed, you could say to this mulberry tree, ‘Be uprooted and planted in the sea,’ and it would obey you.”

There are those who like to twist these words from a ‘temptation to good’ into a ‘temptation to sin.’ They say things like, what Jesus means is that “If you had faith like a grain of mustard seed, you say to this blank check ‘become a million dollars’ and it would.” “You could say to that cancerous tumor in your body, ‘be uprooted and planted in the sea’ and it would obey you.” “If you had the faith like a grain of mustard seed, you could have anything that your sinful, corrupt heart desired.”

All of which is a whole lot easier than “If your brother sins against you seven times in a day you must forgive him.”

Jesus turns the tables on His disciples here. Instead of saying, “if you repeatedly sin against your brother,” ‘QUIT IT,’ He makes His disciple the one who is sinned against.

“If your brother sins AGAINST YOU…” Sometimes we’re the sinner, but sometimes we’re the sinned against. We’ve all been deeply damaged by both sides of sin. We know what it’s like to be sinned against. We know how those roots spread out and sink deeply into us. And we know how this tree produces its fruit of hurt, and anger, and resentment, and separation from the brother or sister… and even doubts about God and His love and goodness towards me.

And now add to all of that a multiplier of seven. “If your brother sins against you seven times in a day…” As we are learning in our study of Revelation, the number seven is the number for ‘completeness.’ In the course of any given day, we can become ‘completely’ entangled in our brother’s sin against us, and it can completely choke the life right out of us.

And is it just me or do you also have those days when swear it would be better to disassociate yourself from the brother or sister, or the husband or wife, or the father or mother, or the neighbor.

But Jesus says, ‘no.’ ‘In fact, it would be better if you told that tree to be uprooted and planted in the sea.’ And you say, “Lord, increase my faith,” as if you believed that there was a hidden power within you that all you had to do was to find that switch and flip it on and you would be free.

It’s not your faith that can command this tree to be uprooted and thrown into the sea. It is only Jesus who can do that. Faith looks outward and trusts in the Word and Promise of this Jesus Christ, who is ‘tempting us to good.’

And it doesn’t take much. Faith no larger than a grain of mustard seed still gets all of Jesus.

It seems impossible that I could ever forgive the one who caused me this hurt, this anger, this wound. “Pay attention to yourselves.” YOU CAN’T. But faith turns to Him who can even give Isaac back to Abraham. And He does what we cannot do. And ‘tempted to good,’ He strengthens our faith.

It seems impossible that that the one whom I have cause this hurt, this anger, this wound, would ever forgive me and remove this millstone I carry around my neck and can’t get free of. But faith turns to Jesus. And He does what we cannot do. He stills the storm and feeds us, and we have His peace and are satisfied. And ‘tempted to good,’ He strengthens our faith.

Contrary to popular opinion, to forgive does not mean to forget. Nor does forgiveness mean to ignore the hurt or try to cover it up with business or booze. None of these work to ‘uproot the tree.’ They only allow the tree to continue to grow undisturbed.

“Faith” gives it all to Jesus. Asking Jesus to “strengthen your faith” is asking Jesus to KEEP TEMPTING YOU TO GIVE IT ALL TO HIM.

Which, whether you believe or not, is what the Father has already done. God the Father handed all of our sin over to Jesus. And Jesus put it all to death in His body on the tree of the cross. He was crucified for the FORGIVENESS of all of your sin – the sin that you have sinned against others as well as the sin that has been sinned by others against you.

Just as sin entered the world by the tree in the garden, Jesus atoned for the sin of the world by the tree in Golgotha. In Him and through Him every tree, no matter how deep its roots go, is uprooted and thrown in to the sea of His blood – because God the Father declared that it would be better for a millstone to hung around His neck than around yours. And it would be better for Him to be thrown into the sea of God’s wrath and punishment, so that you would not.

We come here today, sinners who have been deeply wounded by the sin that we have committed against others and that has been against us – ALL OF WHICH IS COMMITTED AGAINST OUR LORD. And we join our voices with the Apostles saying, “LORD, INCREASE OUR FAITH.”

And He ‘TEMPTS US TO GOOD,’ calling us to repent. And we confess that we are the one through whom temptations to sin have come and to whom they have come. Only to hear Him uproot that sin and that pain, and throw it into the sea of your baptism by His Word that does just what it says. “I forgive you all of your sins.”

And He ‘TEMPTS US TO GOOD,’ calling us to come to His banquet table to eat and drink. And we come. And He gives us His very body and His blood for THE FORGIVENESS OF ALL OF OUR SINS. And the millstone falls off of our neck and we leave it at the foot of the altar.

As long as we are still on this side of heaven, “temptations to sin are sure to come.” There is no escaping them. But now every sin that we commit and every temptation to sin that is committed against us is transformed by God into a ‘temptation to good’. And we learn to forgive and to receive forgiveness. And our faith increases. And our lives are shaped into the pattern that our Lord would have for His disciples.