Posted on November 24, 2019 by Lutheran Church of the Resurrection 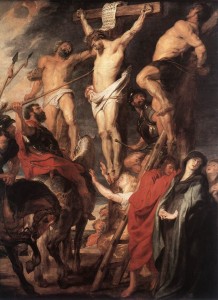 I have counted 21 Sundays now that we have been following our Lord ever since we heard that He “set His face to go to Jerusalem.” And today, on this “Last Sunday of the Church Year” we come to the end of the journey to Jerusalem. From here, the journey continues from “Jerusalem to Judea to Samaria and to the end of the earth” and “to all nations.” (Matthew 28, Acts 1:8).

Which is to say, there’s lots more to come – like – “Christ is risen!” “He is risen indeed, alleluia.”

And isn’t this also why we have been following Him so closely? After all, before we ever DARED TO set out on this journey with Jesus through the season of Pentecost, we had already followed Him through the season of Lent and Easter. And it was there, before we even began this journey to the cross, that we learned that His death was not the end of the road at all? We learned that there is more beyond the boundaries of the kingdom of this world. And we fully intend to follow Him there too.

But as we have just heard, not everyone sees it this way. In fact, of those who we meet on today’s section of the journey, the vast majority reject everything that we have said, who may believe that there is a life after death, but that it most certainly does not proceed through the cross of Christ crucified.

But there is one man who is different than the rest. In fact, he is all alone in this crowd of mockers and he refuses to go along with the crowd. And I would recommend that we find ourselves in today’s gospel in the thief who is crucified with Christ that tradition has placed on Christ’s right, who hears the One in the middle tell him that ‘today – he will reach the goal of the journey.’ “Today, you will be with me in Paradise.”

Here is a man who has NOT been with Jesus on this journey as we have. As far as we know, he’s never met Jesus before today. We don’t know what crime he and the other criminal committed. But we know that it had to have been something serious enough to warrant the punishment of crucifixion.
We aren’t told how long they had been held in their prison cell. But on this day, a Friday, the guards came and led them both out to be crucified.

And as they carry the cross beam outside the city wall to the place of crucifixion, they see that there is another criminal headed to the same destination. This One has been flogged so severely that He is unable to carry the crossbeam to His cross. And so the soldiers have to force a bystander to carry it for him.

And with that, they have joined us on this journey with Jesus.

Arriving at the place that was called ‘the skull,’ ‘Golgotha’ in Aramaic, they are held down by several soldiers as one soldier nails their wrists to the crossbeam. Then they hoist them up onto the upright beam – to which their feet are nailed.

In the midst of their indescribable pain, they scream like they have never screamed with pain that they never imagined was possible to have. And they surely also hear the screams from the One who is hung up between them.

But they hear something else as well. Even as the nails are hammered into His wrists, He is screaming, “Father, forgive them for they know not what they do.”

And just for the sake of accuracy here, the way Luke records this strongly suggests that Jesus didn’t just pray this prayer once, but rather repeatedly He prayed, “Father, forgive them for they know not what they do.”

We dare not hear those words as though they were spoken in a cool, calm, collected voice – as though those nails being driven into His wrists were nothing more than a minor annoyance. HE IS SCREAMING THEM IN PAIN.

Maybe we have heard these words so often that they barely faze us. But this is utterly shocking. Where is His Father? Is He in the crowd of spectators gathered around this bloody spectacle? And if He is, He’s not asking for help or that His Father would save Him, but that He would forgive ‘them’ for doing this to His Son.
Isn’t it’s true that any father who had to watch his son be treated so shamefully as this would be bitter and hateful towards those who were responsible. But He is pleading, repeatedly, that His Father would ‘forgive them.’ This is utterly shocking.

And what is the response of the spectators to this shocking prayer, the likes of which “no eye has ever seen nor ear heard”? MOCKERY! The soldiers strip His clothes from Him and gamble for his garments, while the crowd wags their tongues, saying, “he saved others let him save himself if he is the Christ of God, his Chosen One!”

They mock Him shouting, “If you are the King of the Jews, save yourself” as they put sour wine to His lips which is so unlike the wine that real kings are accustomed to drink. And “there was also an inscription over him, that read, “this is the king of the Jews.”

That’s a lot of information about this man in the middle right there that these two crucified with Him had not known but now do. Think about it as a ‘crash course’ in what we’ve been learning about this man over the course of this journey. They called Him “the Christ of God, his chosen One” and “the King of the Jews.”

And now, just for a moment, let’s push the mute button and block out all of the screaming in pain and the mockery and the mockers and even the others two crucified with Him – and focus solely on the One in the middle. What does He hear? “He saved others, let Him save Himself.” “If you are the King of the Jews, save yourself!” “Save yourself and us!” Three times he hears the words, “save yourself.”

There was a time at the very beginning of this journey when the Spirit led Him into the wilderness and Satan had spoken these same words to him – “If you are the Son of God, save yourself,” not once, or twice, but three times. And Luke tells us, “and when the devil had ended every temptation, he departed from Jesus UNTIL AN OPPORTUNE TIME.” (Lk.4:13).

First, he neither ignores the rebuke of his fellow thief, nor does he remain silent. “Do you not fear God, since you are under the same sentence of condemnation? And we indeed justly, for we are receiving the due reward of our deeds; but this man has done nothing wrong…”

This is a dangerous thing that he has done. To defend this Man whom everyone else is mocking is to invite the same mockery onto himself. By speaking up for this Man in the middle, he is leaving himself vulnerable to the same scorn as He is receiving.

He now speaks to the One in the middle, not in mockery but in prayer, calling on Him by name. “Jesus…” He must have heard His name along the way as well. “Jesus, remember me when you come into your kingdom.”

He too had heard the words about Jesus being a ‘king’ and read the sign above his head. And he believes that this Jesus truly is a king with a kingdom. And he hereby requests citizenship.

He too had heard Jesus pray to His Father for forgiveness for THEM. And he has taken that ‘them’ to apply to ‘him.’ He is not pleading his innocence. He has confessed his guilt. “And we indeed justly, for we are receiving the due reward of our deeds…”

And to this man’s humble confession. Jesus pronounces His divine absolution. “Truly I say to you, today you will be with me in Paradise.”

And with those words, we now realize that this journey actually began a lot further back than we thought. “Paradise” takes us all the way back to the beginning where Adam and Eve lived with God, before they were driven out of Paradise as the “due reward for their deeds.”

But now, from the cross we hear that paradise has been reopened and Jesus is bringing the sons of Adam and the daughters of Eve to be WITH HIM again. As one early church father said, “To be WITH CHRIST is life. Because where Christ is, there is His kingdom.” (Ambrose)

Two other church fathers, one named Jerome and another named John Chrysostom would later claim that Adam was buried at Golgotha – the same spot where Christ was crucified. And even though there’s no actual proof, it’s a beautiful thought. For through His cross, Jesus is bringing the old, sinful Adam back into Paradise again.

As I said, we ought to find ourselves in this account in the criminal on the right. We know that we are just as guilty as everyone in the crowd and the other criminal and the punishment of death is just what we deserve.

But we must also hear Jesus’ word of forgiveness for “them” as for “ME.” And then, entrust ourselves entirely to His Word. “Lord, remember me when you come into your kingdom.”

We dare not be naive. We understand the risks and dangers of confessing faith and trust in Christ before men and women who love to mock not only the Christ but also His Christians.

But our hope is in the Lord and we do not strive for the approval and acceptance of others – but of God, who has given us His full and complete approval through His Son, Jesus Christ.

We take our place with the crucified criminal on the right. And along with him, we let the ‘instruction’ we have received about Christ AND His Kingdom give way to ‘participation’ with Christ IN His kingdom.