Posted on December 2, 2019 by Lutheran Church of the Resurrection 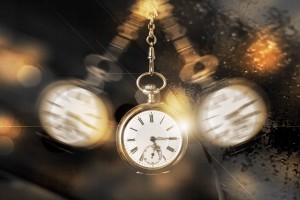 Maybe it’s because I just spent the last couple of days in Chicago and rode the Chicago Transit Authority around town that I thought of the musical group “Chicago.” And maybe it was because our Epistle reading for today begins with these words, “Besides this, you know the time…” that I got to singing the song from The Chicago Transit Authority’s first album that went:

“But does anybody really know what time it is?” Or have we never actually taken the time to think about a question like that? “Does anyone really care?”

Today, you and I are directed to think about ‘time’ to the end that we ‘understand what time it really is.’ In our Epistle reading we heard St. Paul exhort us, “You know the time, that the hour has come for you to wake from sleep.

And St. Paul wants us to wake up before we OVERSLEEP. Time will not go on forever. There is an ‘end of time.’ And right now the clock is ticking and time is winding down. And “our salvation is nearer to us now that when we first believed. For the night is far gone; and the day is at hand…” (Rom. 13:11-12)
There is a day when time will run out and the time will be up. And that day is getting closer and closer when Christ will appear in the fullness of His glory to separate the sheep from the goats, the weeds from the wheat, the good fish from the bad fish. He is coming to “judge the living and the dead.”

And so knowing, the time as only the believer in God’s Word can know the time, we most certainly do “take time to cry.” We cry for ourselves because we have not managed our time the way that we should.

We cry that we have far too often permitted time to manage us rather than managing our time, not using the time that we have to honor our Maker and our Redeemer as we should.

We cry that we seem to so easily lose track of time when it comes to those things that our Lord wants us to do – time in the Word, time in prayer, time to share the gospel with one who doesn’t know what time it really is and doesn’t really care.

These are the times in which the Creator of this world has come into His creation from eternity into time. Paul declares that “the fullness of time had come. God sent forth his Son, born of woman, born under the law, to redeem those who were under the law, so that we might receive adoption as sons.”

Already on this 1st Sunday in Advent we have Palm Sunday, Good Friday and Easter morning in sight. Christ has ridden into Jerusalem, the nails have pierced His hands and feet and the sword His side and the tomb has been vacated. The Son has risen and His light is shining into a dark world and overcoming the darkness.

And soon it will be day when, as John reports, “night will be no more. [We] will need no light of lamp or sun, for the Lord God will be [our] light, and [we] will reign forever and ever.” (Rev. 22:5) No more night followed by sun, which is the way we keep track of time. To which, Paul sounds the alarm clock. For “the night is gone, the day, that ‘eternal day,’ is at hand.”
The good news is that God has set the time and will not be a day late and a dollar short. And for the believer in Christ who knows that he has been redeemed and reconciled to God by the cross of Christ crucified; for the believer in Christ who knows that his judgement has already carried out in his baptism and that he has nothing to fear, the last day when Christ appears is glory is the day we look forward to and even pray, “come Lord Jesus.”

In fact, because we know what time it really is, we count the days to His coming again with the same excited anticipation that a child counts the days until Christmas. Knowing the time, we dare not ‘waste the time’ but ‘use the time.’ St. Paul talks about using the time to the “put off” and “putt on.”

Those specific “works of darkness” happen to be the very things that were perfectly acceptable in the Roman culture in which Paul and his fellows Christians lived. They were, ‘works of the flesh’ meant to gratify the “flesh.” And I don’t think it should too hard for us to find a lot of connection to the culture of our own day.

Rather than living to satisfy the “flesh,” they lived to satisfy their Lord. And it wasn’t that they PROTESTED or CAMPAIGNED AGAINST these things. They simply went about quietly living their life according to God’s Word. “Let us walk properly, as in the daytime,” Paul writes.

They called it “putting on the armor of light” as in carrying out their Lord’s instruction: “You are the light of the world… Let your light so shine before others, that they may see your good works and give glory to your Father who is in heaven.” (Matthew 5:14-16)

And sure enough, it was as they “put on the armor of light,” “walking properly,” “making no provisions for the flesh, to gratify its desires,” that they began to attract a lot of attention, and many followers. And the church actually grew BECAUSE it did NOT adapt to the culture of the day.

Knowing the time moves us to take decisive action. It was in ‘knowing the time” that our Lord took decisive action and sent His apostles to the ends of earth to teach and to baptize all nations. And His time caught up to you. And in your baptism, you “put on Christ.” “For as many of you as were baptized into Christ have put on Christ.” (Gal.3:27). He is your “armor of light.”

So, for you and me, THE TIME HAS FULLY COME. When St. Paul says, “put on the Lord Jesus Christ,” he’s not telling us that we need to be baptized again. He’s telling the baptized that it’s time to “walk in the light.” He’s saying just what the prophet Isaiah said to Israel centuries earlier. “O house of Jacob, come, let us walk in the light of the Lord.”

And who knows that we just might be surprised to hear others, who have been wounded and wearied by the “works of darkness” take note and say to one another, “Come, let us go up to the mountain of the Lord, to the house of the God of Jacob, that he may teach US his ways and that WE may walk in his paths.” (Is.2:5,3).

I’m not sure what the group meant by those words but they touched on an important reality for the Christian to grasp. There are many things that we can do while we still have the time to do them. But the time is coming when every opportunity to “walk in the light” will be up. It’s never a matter of whether we have time enough to die. Death comes and claims each one of us whether we’ve got time for it or not. It comes on the day that God has set for each of us.

And so, because WE KNOW THE TIME as we do, WE USE THE TIME we have been given to prepare for death. We prepare for death by taking time to die every day. Every day, we die to the “works of darkness,” those “works of the flesh,” by “putting them off.” That is, by confessing them and handing them over to your Lord who has already put them off of you in your baptism.

And every day, we take the time to practice “waking from our sleep,” just as we will do on that day when our Lord comes in His glory. Just as we wake from our sleep and get up from our bed and put on our clothes, we “wake from our sleep” and “put on the Lord Jesus Christ” by reading and thinking about His Word and by praying.