Posted on January 6, 2020 by Lutheran Church of the Resurrection 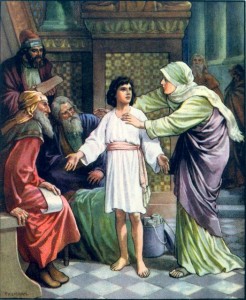 It’s not every year that we get two Sunday’s to revel in the celebration of Christmas. More often than not, we just get one Sunday before we’re off to the season of Epiphany. It’s like that Christmas dinner that took hours to prepare and that was over and done with in under 20 minutes. So today we’re thankful for some time to savor and enjoy the Christmas season.

We’re not given very many details about Jesus’ childhood in the gospels. We’re told about His conception by the Holy Spirit, the humble circumstances of His birth by the virgin Mary and the visitation of the shepherds.

We meet Him again at 8 days old, when He is circumcised and named. And again at 40 days old at the Temple for Mary’s purification and His presentation.

Sometime after that, we’re really not sure how long, there’s the visitation of the Magi and then the flight to Egypt and return to Nazareth. And now He’s 12 years old accompanying his parents to the annual Feast of the Passover. My, don’t the kids grow up so quickly.

The distance from Nazareth to Jerusalem was about 65 miles – about the same as from here to Bangor. On foot it would be a three or four day journey for the average family. When it came time for one of the annual festivals such as this one, families would travel together in caravans. The children would play together along the way, the women would talk about their children and the men would talk about the Patriots, or something like that. There was also safety in numbers.

The festival of Passover lasted a week. Luke says, “and when the feast was ended, as they were returning.” No doubt the same caravan that traveled together to Jerusalem also traveled together back to Nazareth.

Luke doesn’t tell us how it happened that they went a whole day’s journey before Joseph and Mary realized that Jesus wasn’t with them. Luke gets his information for his gospel by interviewing first hand participants. Most likely, he gets the details of this episode from Mary. He either never thought to ask her how such a thing could have happened, or decided to leave that part out as a courtesy to Mary.

But we dare not be too hard on Joseph and Mary for failing to notice that Jesus wasn’t with them – unless we’re willing to be just as hard on ourselves. On Christmas Eve we heard the announcement, “Unto US a child is born, unto US a Son is given.” (Is.9:6). HOW OFTEN HAVE WE LOST TRACK OF JESUS SINCE THEN?

We just expected Jesus would follow us like the good boy that He is, always ready to come when I call because that’s what good boys do. But then one day it dawned on me that I haven’t heard His voice in quite some time. It’s been awhile since I’ve felt the touch of His body in my hands or tasted His blood on my lips. NOW WHERE DID THAT BOY GET TO?

It can happen to the best of us. Remember Job? Job was a “righteous man.” But at one point it dawns on him that his Lord is missing and he cries out, “Oh, that I knew where to find him, that I might come to where he is seated.” (Job 23:3). They could have been Mary’s words too. And maybe there have been times when they were your words too.

I suspect however, that by now you’ve begun to get the idea that there’s just something wrong with the way we’ve been putting all of this. Really, Jesus is not the one who is lost, we are. It’s not Jesus who’s wandered away from us. It’s we who, ‘like sheep GO ASTRAY, each to his own way.”

It’s not that He doesn’t know where I am or what I’m doing any more than He didn’t know where Adam was when he called to him in the Garden – “where are you?” He sees me and I am never out of His sight. He knows what a dangerous world this is and how vulnerable I am and how easily I am persuaded by talking serpents and shiny apples – and the further I wander from my Father’s house and the more distant His voice becomes, the further I wander from my life and my salvation.

I know we don’t think of it in nearly such drastic terms as this. But when the prodigal son left his father’s house and refused to hear his voice then returned, his Father, who had never once taken his eye off of his child but “saw him while he was a long way off” said, “This, my son, was DEAD and is alive again…” (Luke 15:24).

But of course, nothing as introspective as this was going through Joseph and Mary’s mind at all. We can only begin to imagine their distress. At first they are sure he is playing with his cousins and friends and had just forgotten the time. He’s a NORMAL 12 year old boy.

But it doesn’t take long before they realize that something’s definitely wrong. Their child is missing. What must it be like for the parents who can’t find their child? They were right there one minute and the next, they’re gone.

Luke said that they had traveled A ‘DAY’S JOURNEY’ from Jerusalem. So, it took another day to return to Jerusalem. WHAT WAS GOING THROUGH THEIR MINDS AS THEY TRAVELED? It was a big city. And like all big cities, there was a certain danger to it. He could have been kidnapped or injured or even… God forbid, they can’t think that thought. CAN YOU IMAGINE?

Arriving in Jerusalem, Luke reports, they “searched for him.” Where would you begin to search if this were you? Not the ice crème shop or the playground or the Temple. As ‘NORMAL’ as He was, He was a ‘GOOD BOY.’ In fact, He was the only GOOD BOY there ever was. He must be in trouble. Check the police station, the hospital, the alleys, God-forbid, the morgue. CAN YOU IMAGINE?

“They searched for him…”

It’s hard for us to understand what it was like for them because we ALREADY KNOW how it all turns out. We know that their worry and distress was for nothing. They thought that their world was about to explode. But we know that everything was just fine.

But maybe there have been times when we were in their shoes and didn’t know how things were going to turn out. And in our worry and distress and fear, we call to Jesus and no answer comes back. We are desperate to know how the situation will end. And will it turn out well or as bad as I’m imagining it? But He seems lost to us or we seem lost to Him.

Martin Luther had enough experience with this that he had a name for it. He called it the “disertionem gratia” – the “desertion of grace.” It’s when it feels as though God has deserted us and no matter how hard we search and look, we can’t find Him.

Job describes the experience like this, “Behold, I go forward, but he is not there, and backward, but I do not perceive him; on the left hand when he is working, I do not behold him; he turns to the right hand, but I do not see him.” Job looks in every direction for some assurance that the Lord is with him in the midst of his suffering, but he can’t find it.

But then Job says something INCREDIBLY PROFOUND. He says, “But he knows the way that I take…” (Job 23:8-10). And for Job, that’s enough. It’s always good to be able to say, ‘I found Jesus.’ But as long as that ‘I’ is the object of my faith it’s always a fragile and fleeting thing.

How much better to know that whether I can find Him or not, “He knows the way that I take…” How much better to rely on your baptism, where the Lord FOUND YOU, a LOST AND CONDEMNED CREATURE and gave you His unfailing, unchangeable word, “I will never leave you nor forsake you.”

Luke writes, “After three days they found Him in the Temple.” Three days! Three days of pure hell. For Mary, this was a sneak preview of those three days when He really was attacked and robbed and beaten and murdered.

It seemed like an eternity ago when Simeon warned Mary at this same Temple, “a sword will pierce your soul too…’ FOR THREE DAYS, that sword was piercing her soul deeper and deeper and deeper. CAN YOU IMAGINE IT?

And then we read… but how shall we read it? With what emotion should we read these words? With relief, with anger, some volatile mixture of both? “Son, why have you treated us so? Behold, your father and I have been searching for you IN GREAT DISTRESS.” CAN YOU IMAGINE IT?

And when they finally found Him, the 12 year old child replied, “Why were you looking for me? Did you not know that I must be in my Father’s house?”

These are the very first words of Jesus that are recorded in the gospels. And they are the only words from His mouth that are recorded until He is an adult. “Why were you looking for me? Did you not know that I must be in my Father’s house.” He seems as puzzled by His mother’s GREAT DISTRESS as she is by His strange behavior.

With the Rabbis surrounding Him in their stunned amazement at His wisdom, Jesus makes a statement that they will one day crucify Him for. Mary referred to her husband as “your father.” But Jesus corrected her and called God, His Father. “Did you not know that I must be in my Father’s house.”

“Now from the sixth hour there was darkness over all the land until the ninth hour. And about the ninth hour Jesus cried out with a loud voice saying, “My God, My God, why have you forsaken Me?” (Matthew 17:46) He is experiencing the “disertionem gratia” for all of us. It is only because God the Father really deserted His only-begotten Son that you and I have the assurance that He will never desert us.

To think that your faith is so strong that you could never loose Jesus is putting far too much faith in your faith. Even the best sailors will lose their bearings when a dense fog sets in. Only let Jesus words to His mother be His lighthouse to you. “Did you not know that I must be in my Father’s house.”

He will never lose you. He knows where you are and is with you always – with all of His grace and power, working all things for good FOR YOU. But this is where He promises that YOU WILL FIND HIM. He is here, in His Father’s house, doing His Father’s business – baptizing you into the name of the Father, Son and Holy Spirit – absolving all of your sins – feeding you with His very body and blood – assuring you that He knows the way you take.