Posted on January 12, 2020 by Lutheran Church of the Resurrection 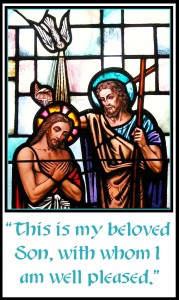 In case you hadn’t noticed, today is all about ‘BAPTISM’ – Jesus’ baptism AND our baptism.

The curtain opens on the wilderness of Judea to which steady streams of people are traveling from “Jerusalem and all Judea and all the region about the Jordan River…” Which is odd, because normally the traffic flows from the wilderness into the city – not the other way around. So, what’s attracting all these people to go into the wilderness?

It’s a man by the name of John who is preaching out there. In fact, he’s been preaching out there in the wilderness for some time before we tuned in. And every day, people go to hear him preach and then return to the city and tell their friends, and more people go to hear him preach and return to the city… And before you know it, “Jerusalem and all Judea and all the region about the Jordan River were going out to him.” (This was obviously before people could shoot videos with their cell phones and post them to ‘YouTube’.)

Every day, John would preach on the same text, Isaiah 40:3 – ‘Prepare the way of the Lord; make his paths straight.’ In one way or another, he would urge the people to get ready to meet your Maker. Don’t delay. Stop procrastinating. NOW is the time to get rid of all of those reasons and excuses that you’ve hiding behind and “come out” (if we dare to put it in those words.) They may be effective for hiding your guilt from your neighbor and even yourself – but God sees right though every one of them. NOW is the time to quit trying to cover up all of those ugly little truths about your life and stand naked before your Creator.

Rather than hiding your guilt and your shame behind your lame excuses because you’re afraid God is going to zap you dead on the spot for them – confess them – out loud. That’s right – ‘confess them.’ Bring them out from hiding and hold them up to God Himself BEFORE He says, ‘I see what you’re trying to hide from Me. But I don’t understand why you’re trying to do that. Is it because you don’t know that I am gracious and merciful, abounding in steadfast love – and would rather FORGIVE you than CONDEMN you? Or, do you know this but just don’t trust Me enough to actually believe it?”

Every day, John would preach his sermon in the wilderness of Judea, and everyday people would go out to hear him and when they returned to the city and anyone asked, ‘what was today’s sermon about,’ they’d say, ‘Repent, for the kingdom of God is at hand…’ And they’d reply, ‘really!?” And the answer would be ‘yea. It’s safe! And it’ll set you free.’

And so we read that “Jerusalem and all Judea and all the region about the Jordan were going out to him, and they were baptized by him in the river Jordan, confessing their sins.”

It was all one action. “They were baptized by him in the river Jordan, WHILE confessing their sins.”

However you picture the scene, don’t picture it the same way you do a Christian baptism. No going under the water three times – in the name of the Father and of the Son and of the Holy Spirit. We’re not there yet. John’s baptism was a ‘Rite of Purification’ that got you ready to meet God. It wasn’t the meeting itself.

But then we read, “Then Jesus came from Galilee to the Jordan to John, to be baptized by him.”

John knows who Jesus is. He knows that He was conceived by the Holy Spirit and born of his virgin aunt Mary. They were cousins. And Jesus had sent John to go ahead of Him and baptize. And John had no problem with that. But when Jesus insists that John baptize Him…

“John would have prevented him, saying, “I need to be baptized by you, and do you come to me?” But Jesus answered him, ‘Let it be so for now, for thus it is fitting for us to fulfill all righteousness.’ Then John consented.”

This episode marks the beginning of Jesus’ ministry. Everything before this simply establishes the fullness of His divinity and the fullness of His humanity. But here is where the work He has come into the world to accomplish as ‘fully God and fully man’ officially begins.

Let’s stop right there and let that sink in. How intriguing, how marvelous, how utterly mystical that His work begins here – in the wilderness, by being baptized in the same water in which “Judea and Jerusalem, and all the region of the Jordan” were being baptized.

If we are to understand the Baptism of our Lord rightly for all of the bottomless comfort that it offers to the baptized, then we must understand that this is where our Lord has chosen to meet His people and unite Himself to them in complete solidarity with them as He begins the work that He has come to do for them.

This is just the way God works. He doesn’t fix things from up in heaven or download patches to repair the damage or fix the virus. He comes down and unites Himself to us even while we are confessing our sins into the water.

This is what Paul preaches when he writes, “We were therefore BURIED WITH HIM by baptism into death, in order that, just as Christ was raised from the dead by the glory of the Father, we too might walk in newness of life.” (Rom.6:3-4)

In your baptism, the Holy Spirit descends on us as it did on Him. And we receive all the gifts of the Spirit – “love, joy, peace, patience, kindness, goodness, faithfulness, gentleness, self-control.” (Gal. 5:22). And most of all, the gift of faith – the change of heart that by nature rejects all of this as superstitious mumbo-jumbo and firmly believes that it is the truest and surest thing there was and is and ever shall be.

In your baptism, the voice of the Father resounds in your heart with His words of full acceptance and love – “you are my beloved child, with whom I am well pleased.”

Holy Baptism gets its power to be what it is and to do what it promises to do ONLY BECAUSE Jesus is baptized. Baptism would never have the power to be anything more than a symbolic ritual if the One who ‘takes away the sin of the world’ had not united Himself to sinners in this way.

As Luther famously puts it, “apart from the Word in the water, the water is just plain water and no baptism. But with the Word of God it is a Baptism, that is, life-giving water, rich in grace, and a washing of the new birth of the Holy Spirit.”(SC- Baptism III)

And that is what makes Holy Baptism such A DANGEROUS THING – or as we are more accustomed to saying – a ‘SACRAMENT.’ When Jesus was baptized, the power of God entered into the water with the baptized people of God.

When Jesus was baptized, He brought His death on the cross into the water with Him. And when you were baptized you were united to His death so that His death became your death. You died WHILE you were still alive.

“Or do you not know that ALL OF YOU who have been baptized into Christ have been BAPTIZED INTO HIS DEATH?”

In the same way, when Jesus was baptized, He brought His resurrection from the dead into the water with Him. And when you were baptized, you were united to His victory over sin and death and the power of the devil. You rose from the dead BEFORE you were buried.

“For Christ was raised from the dead by the glory of the Father, that we too might walk in newness of life.” (Rom.6:3-4)

Luther wants to impress the LITERALLY, earth shattering thing Holy Baptism is because Jesus Christ is LITERALLY in Holy Baptism. In his Large Catechism, Luther says, ‘Imagine there was a doctor somewhere who understood the art of saving people from death or even though they died, could restore them quickly to life so that they would afterward live forever. Oh, how the world would pour in money like snow and rain. No one could find access to him because of the throng of the rich! But here in Baptism, there is freely brought to everyone’s door such a treasure and medicine that it utterly destroys death and preserves all people alive.” (LC IV:43).

One last point to make about the Baptism of Our Lord before we say ‘amen’ to this. Maybe you have begun to wonder if all of this talk about our Lord UNITING Himself to us and we being UNITED to Him in baptism is starting to sound a bit like marriage. And if that’s what you’ve been thinking, then good for you. There is a good deal of ‘two becoming one flesh’ that happens in Holy Baptism that reminds us – even directs us – to Holy Matrimony.

Once again, if we’ll permit it, we’re drowned in divine grace and mercy. For its not we who came to Him with our proposal of how we could make His life so happy and full of joy and what a faithful bride we would be – but He who came to us – not because we were so charming and beautiful – but while we were “confessing our sin.”

Isn’t it is just like this holy bridegroom to come to she who is diseased and wretched and clothed in her filthy rags, only to call her, ‘My beloved’ – and transform her into a beauty that makes the angels blush.

Isn’t it just like this holy bridegroom to come to you in your baptism to give you His name, in fact – the name of the Father and of the Son and of the Holy Spirit. Here, Jesus takes you to be His beloved bride, to have and to hold from this day forward, for better, for worse, for richer or poorer, in sickness and in health, to love and to cherish, till death do us part – which it never will. And He gets down on bended knee and says, “I pledge to you my faithfulness.”

And so we dare not look to the outward circumstances of our life nor to the inward faithfulness of our heart to find assurance of our Lord’s love for us. We look to His baptism and our own baptism where He met us and united Himself to us and gave us death and His resurrection, His name and His unfailing promise.

So, no wonder “Jerusalem and all Judea and all the region about the Jordan were going out to John, and they were baptized by him in the river Jordan, confessing their sins.”