Posted on January 20, 2020 by Lutheran Church of the Resurrection 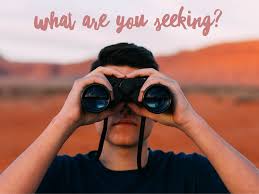 Last Sunday, on the 1st Sunday in Epiphany, we joined the crowds journeying out from Jerusalem and Judea to the wilderness to listen to a man named John preach. His message was, “Repent, for the kingdom of God is at hand.”

And while we were there in the wilderness, we saw lots of people going into the Jordan River to be baptized by John as they were confessing their sins.

And while we were there, we saw One, whose name is Jesus, who came from A DIFFERENT PLACE – He came from Galilee to the Jordan to John to be baptized by him.

And we saw the sky ripped open and the Spirit descending on Him. And we heard the voice of the Father – “this is My beloved Son, with whom I am well pleased.” (Matthew 3:13-17)

Now today, on this 2nd Sunday in Epiphany, we are still in the wilderness. It feels like a whole week has gone by, but really it’s “the next day.” “The next day, John saw Jesus coming toward him and said, ‘Behold, the Lamb of God who takes away the sin of the world!”

“Behold, the Lamb of God, who takes away the sin of the world.” What are you supposed to do with a word like that?

The truth is, there’s lots of men and women who waited all their life for a word like this.
This was the word that Adam and Eve longed to hear as they stood with tears in their eyes, looking from the outside in, through the gates of paradise that had been shut in their face. “Behold, the Lamb of God, who takes away the sin of the world.”

Do you think that these men and women would have known what to do with this word? You bet they would. They would have rejoiced with exceeding joy knowing that the one and only one who can set them free has come to do just that for them.

So are you beginning to get an idea of what you should do with a word like this yet? If you’re still not sure, then let me point my finger at you as John pointed to Jesus, and simply rearrange the same words, ‘Behold your sins that take away the Lamb of God.’

Consider your place in life according to the 10 Commandments: Are you a father, mother, son, daughter, husband, wife, or worker? Have you been disobedient, unfaithful or lazy? Have you been hot-tempered, rude or quarrelsome? Have you hurt someone by your words or deed? Have you stolen, been negligent, wasted anything, or done any harm?”
Behold your sins that take away the Lamb of God.

Consider how much like your parents, Adam and Eve you are. How often have you listened to that voice that said, “did God really say?” Only to respond, “yes but…”
How often have you, like Cain, murdered your brother or sister with gossip or innuendos or brought them down simply because it made you look better or feel better about yourself?
How often like your father David have you wanted to do anything to get what you wanted – even if you didn’t have David’s courage to actually do it?
Behold your sins that take away the Lamb of God.

What are we to do with a word like this? Defend it? Deny it? NO, CONFESS IT. “Then Jerusalem and all Judea and all the region about the Jordan were going out to him, and they were baptized by him in the river Jordan, confessing their sins.” (Matt. 3:5)

So, just let that sink in for the rest of the day.

“The next day…” Time moves fast in the first chapter of John’s gospel. There’s no time for sleeping or daydreaming or to check your e-mail or Facebook page.

“The next day again John was standing with two of his disciples and he looked at Jesus as he walked by and said, “Behold, the Lamb of God!”

So, you’ve had a day to think about it and let John’s word sink into your ears. What do you do with a word like this? “The two disciples heard him say this, and followed Jesus.” That’s what you do with this word. You follow Jesus.

We’re not told how long they followed or how far they had gone before Jesus, knowing they were there, turned and asked, “What are you seeking?”

And once again we wonder, ‘WHAT DO YOU DO WITH A QUESTION LIKE THAT?’ Where do you begin? Wasn’t it tempting to tell the greeters to greet everyone as they enter the building, not with a ‘good morning,’ but ‘what are you seeking?’

‘What are you seeking?’ The temptation is to make a list. “Let’s see, what am I seeking? I’m seeking employment, financial stability, a loving spouse, grateful children, a cure for cancer. I’m seeking happiness.” Where does a list like that end?

But the fact that we’re not too sure what to do with an offer like that when it comes from Jesus tells you something about us doesn’t it? We know that Jesus wants us to ask Him for something. We know that He wants to give us something and we’re supposed to ask for it and seek it. But what?
“I know that you’re hungry for something. Would you like to eat?” “Yea, I guess so.” “What would you like to eat?” “I don’t know. Food, I guess.” “Can you be more specific than that?” “No, not really.”

Two weeks ago we were at the Temple in Jerusalem where the 12 year old Jesus was when the panic stricken Mary and Joseph found him. After a good scolding from his mother, Jesus replied, “why were you seeking me, did you not know that I must be in my father’s house.” (Lk. 2:49) And we said that these were THE FIRST SPOKEN WORDS OF JESUS IN LUKE’S GOSPEL. “Why were you seeking me?”

Now THE FIRST SPOKEN WORDS OF JESUS RECORDED IN JOHN’S GOSPEL are these, “What are you seeking?” There’s a theme that’s developing here.

C.S. Lewis touches on the way this question challenges and exposes us when he writes, “There comes a moment when the children who have playing cops and robbers suddenly freeze… was that a real footstep in the hallway? And they realize that the game they’ve been playing might suddenly have just become real. There comes a moment when people who have been dabbling in religion suddenly draw back in fear. ‘Suppose we really found Him? We never meant to actually come to that! And then an even deeper fear comes over them, ‘worse yet, what if He found us.’” (C.S. Lewis – Miracles)

The two disciples of John answered, “Rabbi, where are you staying” – which isn’t as silly a response as it at first sounds. They’re not really asking Jesus where He is located. By addressing Him as ‘Rabbi’ they are asking where he is remaining so that they may remain with Him

“And he said to them, ‘Come and you will see.’ So they came and saw where he was staying, and they remained with him that day, for it was about the tenth hour.”

They didn’t ‘visit’ Him or ‘interview’ Him or ‘spend some time’ with Him. They ‘remained’ with Him – which just happens to be the definition of what it means to be a disciple of Jesus. “Remain in me, and I in you. As the branch cannot bear fruit by itself, unless it remains in the vine, neither can you, unless you remain in me… Whoever remains in me and I in him, he it is that bears much fruit, for apart from me you can do nothing…  If you remain in me, and my words remain in you, ask whatever you wish, and it will be done for you.” (John 15:4-7) “If you remain in my word you are truly my disciples.” (John 8:31)

It was as they ‘remained with Him’ that they got the answer to the question that Jesus had put to them, “what are you seeking?” They hadn’t known what they were seeking from Him, but after “remaining with Him” they knew exactly what they and every human being ever created is seeking whether they realize it or not. One of the two, Andrew, found his bother Simon Peter and said, “We have found the Messiah. And he brought Him to Jesus.”

And then we take the bread and the wine and we eat His body and drink His blood. And in this way, He shows us where He is staying – He is staying in us. And He REMAINS in us even as we REMAIN in Him. And He makes us His disciples.

And that which you have been seeking in the deepest depths of your soul is given to you. For “the Lamb of God who takes away the sin of the world” has taken away your sin too.