Posted on February 3, 2020 by Lutheran Church of the Resurrection 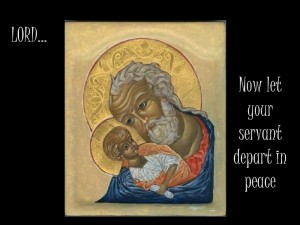 The text is our gospel reading which opened with these words, “And when the time came for their purification according to the Law of Moses, they brought Him up to Jerusalem to present Him to the Lord.” And closed with these words, “And when they had performed everything according to the Law of the Lord, they returned into Galilee, to their own town of Nazareth.”

It’s on what took place between their coming to church and their returning home that our attention is focused today.

For those of us who may not be familiar with the Jewish law, Luke explains that the holy family is making the journey to Jerusalem for their purification and to present their baby to the Lord.

There are two things going on here. First is the business of ‘purification.’ This applies particularly to Mary. The “Law of the Lord” in Leviticus 12 requires that when a Jewish woman gives birth to a boy, she remains ‘unclean’ for 40 days and cannot come into the Temple.

Which may sound ‘chauvinistic’ to our modern ears, but think about it. What new mother wouldn’t welcome this law? In His mercy and kindness, God Himself gives a new mother His order to take a 40 day maternity leave to stay home and recover and bond with her baby. What women have fought to just recently attained from their employers, God has given freely from ancient times.

When the 40 days was up, she would bring an offering to the Lord at the Temple as the law required – “pair of turtledoves or two young pigeons.”

As a perpetual reminder of His love and care for them, God declared that every firstborn male belongs to Him. Hannah may have left her firstborn son, Samuel, at the Temple, but most of the time, mothers and father would ‘buy back’ their sons for the ‘redemption price.’

So, we read, “when the time came for their PURIFICATION according to the Law of Moses, they brought Him up to Jerusalem to PRESENT Him to the Lord.”

But even if we understand the Jewish law now better than we had, other questions are raised. Like, ‘why does Mary, who was a virgin and her Child, the sinless Son of God need to be ‘PURIFIED’? This was the pure and holy birth of a pure and holy child.’ Nothing needs ‘purifying.’

So it’s right here that our question gives way to pure gospel. Surely the virgin Mary and her baby boy could have claimed an exemption from all of this. But the fact that they do not means that this baby boy born of Mary has come into this world to so intimately join Himself to us, not only sharing our flesh and bone and blood, but also to share in our burden in living under the holy Law of God.

It’s the same regarding His REDEMPTION. How absurd is it that the Redeemer of the world is brought to the Temple to be redeemed by the blood of two pigeons? And all of it, before Jesus can utter a word or walk. Like a baby brought to Baptism, the Lord of all must be carried to the Temple by His parents.

Again, our question gives way to pure gospel. Surely He could have been exempted from this. But as we heard the writer to the Hebrews say, “Since therefore the children share in flesh and blood, he himself likewise partook of the same things that through death he might destroy the one who has the power of death, that is the devil, and deliver all those who through fear of death were subject to lifelong slavery… Therefore, He had to be made like brothers in every respect…” (Heb. 2:14-17)

Joseph and Mary would have entered the Temple through an entrance reserved just for this purpose called “the gate of the firstborn.” There they would have waited while an offering of incense was made in the Holy Place. From there, they would walk up a short stairway to the Court of Women.

It was here that they would have waited until the next available Priest on duty came to take the sacrifice from them and sprinkle Mary with its blood to indicate that the cleansing of all of her sinfulness was completed and the child was both dedicated to the Lord and redeemed, and therefore free to return home with them.

It is at this point that we are introduced to a man named Simeon. Luke tells us that Simeon is “righteous and devout and waiting for the consolation of Israel and the Holy Spirit was upon Him. And it had been revealed to him by the Holy Spirit that he would not see death before he had seen the Lord’s Christ.”

To say that Simeon was ‘righteous’ is not to say that he is perfect or without sin. Throughout the Scriptures we’re told that a person is ‘righteous’ by faith – as in, “Abraham believed God and it was credited to him as righteousness.”

And the fact that Simeon is “devout” simply means that he is ‘devoted’ to this faith and strives to live by faith. None of this ‘spiritual but not religious’ stuff that we hear so much of today would have fit Simeon. Simeon knew his bible and he knew that the consistent message that runs through the entire bible is that God has promised to deliver His people from sin, death and the devil by a Messiah. And believing this, Simeon was “waiting for the consolation of Israel,” not as though it might happen, but as though it could happen today.

I’m not sure how you get a faith like that except by the Holy Spirit. And we read, “the Holy Spirit was upon Him.” And in answer to his deepest longing, the Holy Spirit had somehow revealed to Simeon that “he would not see death before he had seen the Lord’s Christ.”

I don’t know about you, but I can’t help but wonder what it was like for Simeon to know that he would not die until he saw with his own two eyes, the Lord’s Christ, who had been promised since the Garden of Eden and prophesied through the entire bible.

I know someone who wants to die because she’s lost all interest in living. She’s lived a full life and is ready for the life to come and she’s getting impatient and sometimes a little angry with God because her time hasn’t come. And maybe you know someone like that too.

I also know people who are so afraid of dying that they refuse to think or talk about it. They’d never consider writing out a Will or picking a few hymns they’d like sung at their funeral service. And maybe you know someone like that too.
What was it like for Simeon?

Being the ‘devout’ man that he is, Simeon no doubt came to the Temple regularly. Maybe he was a Priest. But on this day, Simeon “came in the Spirit into the temple…” As Joseph and Mary stand there holding Jesus, waiting for a priest to come to take the sacrifice for their cleansing and redemption from them, Simeon approaches. But instead of reaching for the two pigeons, he takes the baby. He has taken the true sacrifice that will cleanse and redeem them and the whole world into his arms.

“Lord, now you are letting your servant depart in peace according to your word…”

“Depart in peace.” Familiar words that we hear after we receive the Lord’s Supper. Maybe when you hear ‘depart in peace’ you took it as your cue to return to your seat. But no, these are Simeon’s words and they mean the same for you as they did for him. Having just held the Lord’s Christ in your hands just as Simeon did, ‘you too are ready to die in peace.’

“Lord, now you are letting your servant depart in peace according to your word; for my eyes have seen your salvation…”

In the beginning, the serpent lied to the woman in the garden promising her that if she would only listened to his word and not God’s, and eat what He forbade, her ‘eyes would be opened.’ And ever since, men and women have been blind to see what is right in front of their face.

Confirming the prophetic word, the baby in Simeon’s arms would one day lament, “seeing they do not see and hearing they do not hear, nor do they understand.” (Mat. 13:13).
But now, as he holds in his arms the One whom the same prophets declared would “open the eyes of the blind,” Simeon declares, “for my eyes have seen your salvation…”

I wonder how many other people who were in the Temple that same day who saw Joseph and Mary and the baby but who never saw their ‘salvation.’ I wonder how many people come to church every Sunday and never ‘see’ what the Holy Spirit has opened our eyes to see – our salvation in the bread and the wine that are given to take and eat.

Whether Simeon saw all of this as he held the baby Jesus in his arms or not we cannot say. But I pray that we would see all of this as we hold Him at this railing.

And then we read, “And his father and his mother marveled at what was said about him.”

I’ve always thought that to be a bit odd. They knew who this baby was. The angel of the Lord had told each of them personally. They knew who He was, and yet still, as they hear this sermon from Simeon about their Son, they “marveled at what was said about him.”

I think it’s like that for us too. We know who Jesus is. We know that he is our Redeemer and Savior. And yet, we love to hear Christ preached. And every time we do, we ‘marvel at what is said about him.”

Before they left church that day, the holy family was greeted by an elderly woman named Anna. Despite her a rich, religious pedigree, she had had her share of sorrows and disappointments and pain- widowed after only seven years of marriage.

“And coming up at that very hour she began to give thanks to God and to speak of him to all who were waiting for the redemption of Jerusalem.” She must have heard Simeon’s sermon and the Holy Spirit, working through the preaching of the gospel, opened her eyes and her mouth too.

And I pray that the Holy Spirit would do the same for us.