Posted on February 10, 2020 by Lutheran Church of the Resurrection 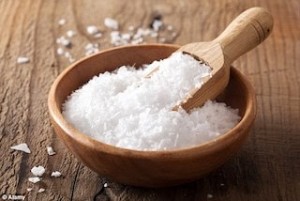 “You are the salt of the earth.” “You are the light of the world.” These are the words of our Lord that come immediately after the Beatitudes. With His disciples and the crowds surrounding Him, “He went up on the mountain and when He sat down, He opened His mouth and taught them…”

I think we would all agree that this is about as ‘counter-cultural’ and ‘other-worldly’ as you can get. Which of the political candidates campaigning for your vote would dare promise you any of these nine things let alone call it the ‘blessed’ life? As we heard St. Paul write to the Corinthians, “this is not a wisdom of this age or of the rulers of this age…” (1Cor. 2:6)

No, it is just the opposite that our life in the Kingdom of Heaven might be by pure grace alone. First He puts His blessing on them, and blessed by God even while they were still sinners, they are ‘meek’ and they ‘hunger and thirst for more of this righteousness,’ and they are ‘merciful…’ and so on.

This is the way it is for everyone in the Kingdom of Heaven. There is no room for ‘pride’ or ‘boasting’ or ‘self-righteousness.’ Not one can say, ‘He blessed me because of some goodness that is in me.’ No, “He blessed me because of some unfathomable goodness that is in Him.” And if that doesn’t make you meek and hungry for more and merciful and a peacemaker… then maybe you’ve got the order wrong or maybe you’re not listening.

What did our Lord mean when, after putting His blessing upon them, He sent them into the world to be ‘salt of the earth’ and ‘the light of the world’? We want to know because this is our charge too.

II. “You are the salt of the earth.”
We begin with “you are the salt of the earth.” This is a tough one to get a grip on simply because ‘salt’ has so many different uses and purposes. Salt is used as a preservative for food. It was also used for basic first-aid to sterilize cuts and wounds. Salt is also used in cooking because it brings out the flavor of the food. Throughout the Old Testament, salt is added to the sacrifices and seems to be the sign that God will ‘preserve’ the covenant He made with Abraham to ‘bless the world’ through Abraham.

The question is, which of these did Jesus have in mind when he said, “You are the salt of the earth.” And the truth is, we really don’t know. It could have been one or two or all of them that He had in mind. And frankly, all work very well in helping us understand what the life of the ‘blessed’ is to be like in this world.

First, consider the ‘preserving effect’ of salt. Even to this day, salt is a common way to preserve food. I looked this up. “Salt creates an environment that is resistant to spoilage and inhospitable for the survival of pathogenic organisms in foods.” (You can tell that I looked that up!)

When our Lord puts His blessing on us and sends us into the world to be “the salt of the earth,” we are to be ‘preservatives.’ God has created certain ‘institutions’ for the welfare of all society – institutions such as Marriage, Family, Government, and Community. And as we well know, these institutions are all infected with sin which causes spoilage and rot.

By sprinkling His ‘Christians’ into the world, He is working to preserve these institutions, not only for the welfare of His Christians, but for ALL SOCIETY. Christians PRESERVE the institutions of marriage and family and government by carrying out our vocations as spouses and parents and citizens and neighbors according to the BLESSINGS that God has put on us – meekness, hungry and thirsty to do things ‘rightly,’ according to God’s Word, mercifully, as peacemakers, even willing to bear the ridicule or even rejection of others if need be. “You are the salt of the earth.”

Second, in Jesus’ day, salt was used to sterilize wounds. Salt poured onto an open wound bites and stings. And in this way, salt has the same effect as the Law of God sprinkled onto a sinner wounded by sin. God’s Law with it’s “Thou shall’s… and Thou shall nots…” make us shout, ‘Hey, that stings!’ ‘Hey, that burns.’ At least if we’re listening they do.

I can still remember as a child when I had a cut or scrape, my parents would put iodine or alcohol on it and boy, wouldn’t that burn. And I would complain that it stings. And they would say, ‘that’s good. It means its’ working.’

Jesus sends His Christians into a wounded world with His Law. And we shouldn’t be surprised if the response to our saltiness is, ‘Hey! That stings! That burns!’ Remember what Jesus said, “Blessed are you when others revile you and persecute you and say all manner of evil against you falsely on my account. Rejoice and be glad.” It means its’ working.

Third, salt is used to bring out the flavor of food. I’m not all the way there yet, but I know that some of you have had to cut salt out of your diet because of high blood pressure, you’ve had to sacrifice a lot of flavor in what you eat.

Our Lord sends His Christians into the world as the “salt of the earth” to bring out the wonderful flavors of His creation and the even richer flavors of life in His Kingdom of Heaven. How does the Psalmist put it? “Taste and see that the Lord is good.” (Ps.34:8)

“You are the salt of the earth.”

“You are the light of the world.”
Light reveals. That’s what the season of Epiphany is all about. The baby born of Mary is revealed to be the Son of God. Matthew tells us that the prophet Isaiah was pointing right at Jesus when he said, “the people who walked in darkness have seen a great light; those who dwelt in a land of deep darkness, on them has light shone.” (Is.9:2)

Jesus sends His blessed ones into a world covered in darkness to reveal Him who is the ‘light of the world.’ But as John points out, ‘light’ is not always welcomed as it should be. “And this is the judgment: the light has come into the world, and people loved the darkness rather than the light because their works were evil.” (John 3:19-20).

And so we shouldn’t be surprised or confused if a world that has come to “love the darkness” doesn’t welcome the light but “reviles you and persecutes you and utter all kinds of evil against you falsely.” To which, our Lord says, “rejoice and be glad.” We’re in good company. “For so they persecuted the prophets who were before you.” For so they persecuted the “light of the world.”

Don’t cover it up. “Let your light shine before others, so that they may see your GOOD WORKS and give glory to your Father who is in heaven.”

“You are the salt of the earth.” “You are the light of the world.” Our Lord has put His blessing on us and sent us into this world to ‘preserve’ to ‘heal’ to ‘bring out the flavor’ and to reveal Jesus who abides in us.

And so maybe now we can understand the reason for the stern warning that our Lord gives to His Christians who He sends into the world with His blessing. “If salt has lost its taste, how shall its saltiness be restored? It is no longer good for anything except to be thrown out and trampled under people’s feet.” “Nor do people light a lamp and put it under a basket…”

Here’s the temptation that tempts us all – to “relax the commandments” of God. It seems like the ‘kind’ and the ‘gospel’ thing to do so that it doesn’t burn so much or is not so harsh on the eyes. We would like to ‘relax the commandments’ to ease a guilty conscience OR relieve an awkward tension between friends or family members.

I know that it seems like the loving thing to say, ‘God accepts you just the way you are, regardless of what you think or do or say or believe.’

This was the attitude of the Corinthian congregation of our Epistle reading. They were so ‘gospel oriented,’ so ‘enlightened,’ that they tolerated just about anything. They boasted, “all things are lawful to me…”

In trying to be all things to all people, they relaxed the commandments of God to the point that they were no longer ‘salt’ or ‘light’ to the world. And consequently, they no longer had much of anything to say or reveal to a dark and wounded world.

Paul appeals to them, writing, “Now we have received not the spirit of the world, but the Spirit who is from God, that we might understand the things freely given us by God.” (1 Cor. 2:12)

THAT BURNS! THAT REVEALS!

But now listen to what follows. “Do not think that I have come to abolish the Law or the Prophets; I have not come to abolish them but to fulfill them.” Not matter how gracious our good intentions to “relax the commandments” may be, to do so actually ‘relaxes’ the work that Jesus has come into this world to do and accomplished by His life and death and resurrection from the dead.

By ‘relaxing’ His Law, we are ‘relaxing’ the price that He paid for our breaking His Law. And if we ‘relax’ the commandments enough, ‘iota by iota,’ ‘dot by dot,’ eventually you won’t need Jesus at all.

The ‘salty’ truth is, God DOESN’T accept us ‘the way that we are’. He DOESN’T love us for ‘who we are.’ If He did, why would there be any need to send His Son to the cross? Paul writes to Timothy, “the saying is trustworthy and deserving of full acceptance, that Christ Jesus came into the world to save sinners…” And rather than relaxing the Law for himself, Paul tightens it…of who I am the foremost.” (1 Tim. 1:16).

This is hard. And the closer the relationship the harder it is. And it can only be done by those who themselves are “poor in spirit,” “who mourn,” “who are meek and merciful and peacemakers and who hunger and thirst for righteousness.”

And it requires heaping doses of prayer, and repeated confession and forgiveness, and the complete acceptance and overflowing encouragement of love from the ‘communion of saints.’

But this is a “GOOD WORK” – unlike any other “GOOD WORK.” And by the grace of God, we never lose hope that “they may see your GOOD WORKS and give glory to your Father who is in heaven.”