Posted on September 25, 2016 by Lutheran Church of the Resurrection 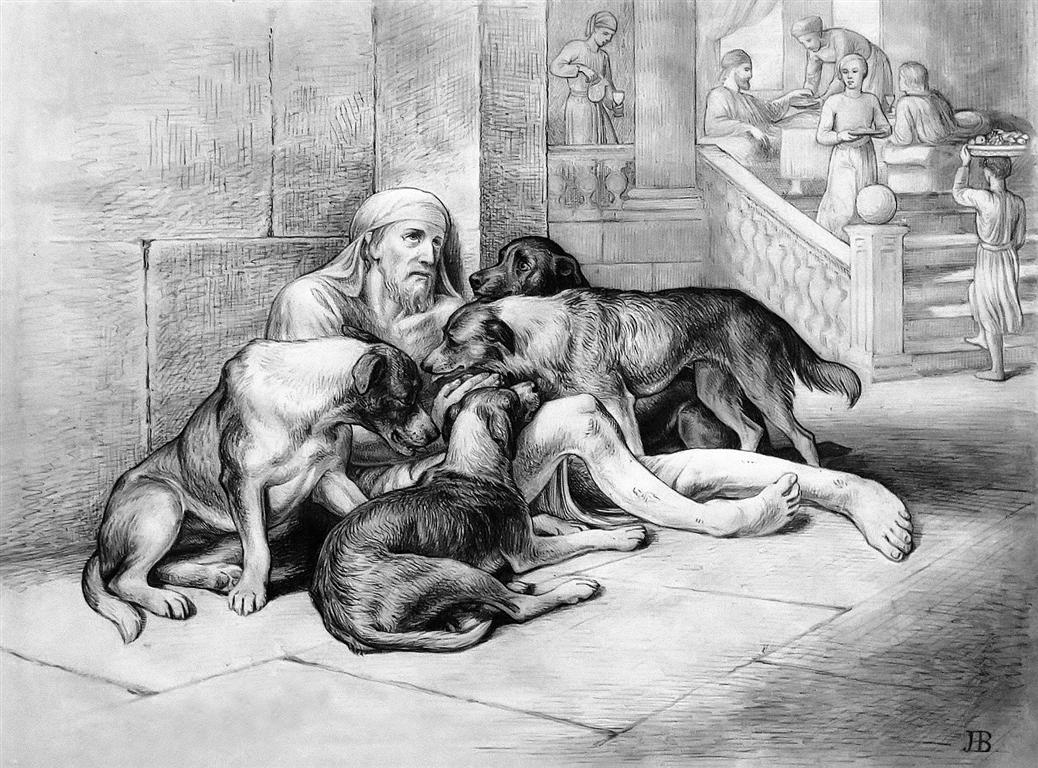 Our journey with Jesus continues and as He makes His way to Jerusalem and to His cross, He invites us all to follow Him and teaches us what it means to be a ‘follower of Jesus.’ Last Sunday, Jesus spoke to His disciples in a parable about a dishonest manager. At the end of the reading however we discovered that the disciples of Jesus were not the only ones listening. “The Pharisees, who were lovers of money, heard all these things. And he said to them…” (16:14).

I. On Earth
“There was a rich man who was clothed in purple and fine linen and who feasted sumptuously every day. And at his gate was laid a poor man named Lazarus, covered with sores, who desired to be fed with what fell from the rich man’s table. Moreover, even the dogs came and licked his sores.”

The contrast between these two men couldn’t be more striking.

The one covered in purple, the color of royalty. Under his outer robes he wore “fine linen” garments.
The other is covered in sores with nothing to cover them with, to keep the dogs off of him.

The one feasted sumptuously EVERYDAY. It’s one thing to ‘feast sumptuously.’ Special occasions call for special celebrations. But ‘EVERYDAY’ is gluttony to the 10th power. And here’s the kicker. This man’s daily, sumptuous feasts must have been in plain sight of the other man who could only watch the food that fell from the table onto the floor while his belly growled.

II. Death
The scene suddenly shifts and both of these men die. Again, the contrast between the two is striking.

Sooner or later, death comes to all, rich or poor, religious or non-religious. We’re all gonna die someday. “Therefore, just as sin came into the world through one man, and death through sin, and so death spread to all men because all sinned…” (Rom. 5:12).

III. Heaven and Hades
The scene shifts once more and after the funerals are all over, both of these men are very much alive. Death is not the end of life. It’s just the door that separates this world from the next. Everyone dies. Everyone must pass through the door. But not everyone wakes up in the same place.

“And in Hades, being in torment, [the rich man] lifted up his eyes and saw Abraham far off and Lazarus at his side.”

But once again, the contrast between these two men is striking.

It’s a mirror image of the opening scene. And you know how it is with mirrors, everything is in reverse. Now THE RICH MAN IS IN TORMENT. “And he lifted up his eyes…” Everyday poor Lazarus would be carried and placed in front of his gate hoping that the rich man might “lift up his eyes” and see him and in seeing him HAVE COMPASSION upon him and SHOW MERCY to him. But he never “lifted up his eyes.”

But now, in Hades, “he lifted up his eyes.” And maybe for the first time in his life, he saw Lazarus.

AND HERE’S THE REAL KICKER. The rich man can look right into where Lazarus is sitting at the heavenly banquet table where EVERYDAY is a royal feast of feasts. And all he could do is watch as his tongue that had tasted the finest foods and the choicest wines was being seared and rendered unable to taste a thing, and his body was in “anguish in this flame.”

And this POOR MAN cries out to Abraham, “Father Abraham, have mercy on me…” the very thing that he refused to have for Lazarus. “And send Lazarus to dip the end of his finger in water and cool my tongue for I am in anguish in this flame.” As Lazarus had once longed for the scraps of food that fell from this man’s table, now this man longs for a drop of water that might fall from Lazarus’ finger.

“But Abraham said, ‘Child, remember that you in your lifetime received your good things, and Lazarus in like manner bad things; but now he is comforted here, and you are in anguish.”

Lazarus was one of those “friends” that we heard Jesus speak about to His disciples last week. “Make friends with yourselves by means of unrighteous wealth, so that when it fails they may receive you into eternal dwellings.” (Lk. 16:9) (A. Just)

THE MAN’S PLEA FOR MERCY IS DENIED. There is a time for repentance and turning from our sin and a time for forgiveness and new beginnings and being “merciful even as your father is merciful.” (Lk. 6:36). But that time is TODAY while it is still TODAY. When we die, time stops and there is no more time for repentance and turning from sin and using the wealth and abundance that God has given to you show mercy to your neighbor.

“Between us and you a great chasm has been fixed, in order that those who would pass from here to you may not be able, and none may cross from there to us.’”

The scene is a disturbing one, to say the least. We may have some feelings of pity for the man in Hades, if only because we may see ourselves in him and we’ve always said that ‘it’s never too late.’ But here’s a man for whom it IS too late to change. “For that which comes last lasts.”

But I also think that this is a disturbing scene for another reason than just sympathy and pity for this man. This man is a religious man. Jesus is speaking to the Pharisees here who are the religious of the religious. This man knows Abraham and calls him ‘father Abraham.’

It’s not because this man never went to church or never confessed the one, true faith – “the Lord your God is one,” that he is in hell. He did. He is in hell because of the way he used, or better put, refused to use his wealth and possessions. He was a “lover of money” who, despite all his religion and piety, firmly believed that he could “serve two masters… God and mammon.”

The stern warning on this stop on the journey with Jesus should be clear to all of us here who are wealthy and have possessions IN ABUNDANCE. Wealth and possessions and a comfortable lifestyle are powerful things that have the potential to become the gods that rules our hearts and minds and our hands, regardless of how religious we might be.

The rich man in Hades, thinks of his five brothers who are still in the world and STILL HAVE TIME. “I beg you father Abraham to send [Lazarus] to my fathers house, for I have five brothers so that he may warn them, lest they also come into this place of torment.”

He thinks that if Lazarus were to appear to his brothers, who may well be his fellow Pharisees that used to wine and dine EVERY DAY with him, that they would listen to him and repent and “lift up their eyes.” Here’s a man who believes in signs and if Abraham would give them a ‘sign’ they would ‘be merciful.’

Really? How many times did God send this rich man a ‘sign,’ the sign of Lazarus, everyday, right in front of his gate, with open sores and sunken belly like flashing lights, and he never even “lifted up his eyes”? What makes him think that his brothers will see what he never saw?

“But Abraham said, ‘they have Moses and the Prophets; let them hear them.’”

It is the Word of God alone that has the power to create faith in the heart and cause us to “lift up our eyes.” It’s not through signs and wonders that God works to turn us from our sin and change our heart. In our blindness we see what we want to see and interpret it the way we want to interpret it.

“No father Abraham, but if someone goes to them from the dead, they will repent.” He thinks that if his brothers were to see the poor man who was hungry and thirsty and naked and covered with open wounds WHO DIED, if they were to see THIS MAN risen from the dead, then they would believe and turn and be saved.

“And Abraham said to him, ‘if they do not hear Moses and the Prophets, neither will they be convinced if someone should rise from the dead.” It’s a sad way to end this account, if only because we know that so many will not be convinced even if someone, the someone of whom Moses and the Prophets all point to and who is speaking to them, should rise from the dead.

IV. Conclusion
There is one important detail in this account that we have not yet touched on but must be said before we have said all that needs to be said about it. From the beginning, we have never once heard the rich man’s name. But the poor man’s name we have heard repeatedly – “Lazarus.” Lazarus is known by name in heaven.

In your baptism, the Triune God knows your name even as He has given you His Name. And you are here this morning, hearing His Word, the word of Moses and the Prophets, fulfilled in the person of Jesus Christ, who died and rose from the dead.

Whether we are rich or poor, all of us will go through the door and stand before the one, true God… as poor, miserable, beggars. And the God of all mercy and grace will “lift up His eyes” and see you, and call you by name, and invite you to come and sit with Abraham and Moses and all of the poor, wretched sinners who heard His Word and believed it and eat and drink and be perfectly satisfied.

Even now, He invites you, in your poverty, to come to His banquet table, with all the company of heaven, that He might satisfy your hungry heart. It’s heaven on earth, eternity in time, a foretaste of the feast to come.